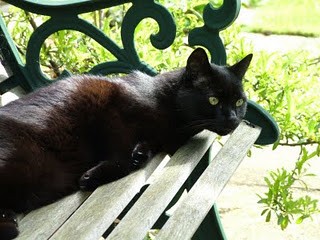 I tried to put a logical explanation to it, so I blamed my hormones as they were playing havoc with me, especially as I’d run out of certain herbs and vitamins that I take on a daily basis. But deep down I knew it was a “psychic knowing”.

My Friend Emily arrived, she was in quite an emotional state as her beloved cat Charlie had recently had a seizure and wasn’t very well. Charlie, who Emily often spoke fondly about over the years, was 17 and had shared Emily’s journey of life through home, husband, boyfriend, country and now Hampshire. Through thick and thin, he was undoubtedly her best friend.

After listening to Em’s (as I’d call her), dilemma of wanting only the best for her cat, she didn’t want to go through the trauma of having to make the decision to have him put to sleep. She hoped there may be an underlying problem causing the seizures which could be cured. She felt guilty being away from him, but she was only a phone call away should he deteriorate.

It’s always hard trying to say the right thing when you know the inevitable is just around the corner and this was just part of the dying process that Charlie was going through. All I could do was to be there for my friend in her time of need.

Animals bring so much joy and comfort into our lives but they’re only here for such a short time and the pain of losing such a special friend is beyond comprehension and often more than one can bear.

Emily isn’t a spiritualist and hasn’t experienced the gentle touch of spirit. She hears me babble on about life after death and hopefully she’s grasped the concept of “life is continuous” after physical death. When someone is going through such a painful experience the last thing they want is to be preached to. A careful sympathetic and empathetic handling was very much the order of the day. She’s a practical person but needed strength to get her through. It was difficult for her to come to terms with the situation and didn’t know what to do for the best.

As she was speaking I asked spirit to let me help her in a way which was appropriate for her pain. I just know that she needed Terri, her friend, not Terri, the Medium!!! Even though the two merge as natural channel for the Spirit.

The conversation then got on to me. Emily asked how I was feeling that day? I started to explain how I woke up and feeling agitated. Whilst we were talking her mobile rang, she instinctively knew it was bad news. The call she was dreading came, Charlie was deteriorating, his life was ebbing away. I told her to leave immediately and if she needed me she just had to call and I’d be there for her.

I had to pick up my partner’s mother, Doris, from the hospital as she’d had problems with her eye’s and needed further investigative tests. As I was travelling to the General Hospital in Southampton I had this overwhelming need to go to “The Range store” on the Winchester road, which wasn’t to far from the hospital. I dropped off Doris and found myself parked and in the store before I knew it. I hadn’t been in there long when my mobile rang and it was Emily, hysterical. Charlie was dying and she was on her way to the vets but she was caught up in traffic and felt helpless. I could hardly understand what she was saying as she was full of tears and extremely emotional. I wanted to be there for her as she was in such a state.

I could hardly understand what she was saying, but I just wanted to know where she was and where was the vet’s surgery. She replied I’m on the road near Wicks on the Winchester Road, I’m stuck in heavy traffic and not sure if I’ll reach the vets in time, she said. I tried to calm and reassure her that she would make her destination in time but I asked again “where exactly is the surgery”. She replied “next door to the Range, the entrance of the car park is next to the Range”. I ran out of the store whilst on the phone and there right in front of me, to my amazement, was the surgery, which I didn’t notice on my arrival. I calmly said I’m already here waiting for you, totally unaware and without realising it Spirit had guided me to be there on hand for a friend who was desperately in need of a friend. On her approach I guided her into the vacant parking space, she rushed out of the car with Charlie into the vets. The nurse took him immediately and started to give oxygen to help him breathe.

Em’s ex boyfriend, who also loved and adored Charlie, soon arrived. They both wanted to be there for him. I thought that I was now in the way and I could do no more but knew that Emily and Charlie were in good hands. Later that night I felt compelled to text Em and enquire how Charlie was doing, as I felt sure the passing was very close. She replied back immediately and said he’s just passed peacefully away at home. A perfect passing, as I knew she didn’t want the cat to be put to sleep at the vets. She wanted him to pass naturally at home with the two people that loved and cared for him.

I’m sure once Charlie has adjusted to his new surroundings in Spirit that he’ll be back as large as life to see his much loved friend. The love and bond that we have for our animal friends is eternal. I know God is taking good care of him until they meet again. He’s at peace with no more suffering.

The next day I felt the urge to buy Emily a pyracantha to plant in memory of Charlie. I thought it was perfect and would always mark the anniversary of his passing with the beautiful winter red berries and summer blossom of white delicate flowers. I walked into Morrison’s my local superstore and there right in front of me was just one beautiful pyracantha, which was obviously waiting for me! I couldn’t’t wait to give it to Emily. I felt it would help to cheer her up as I knew she felt devastated and inconsolable. When she came over that day she just could not get over how I was at the vet’s before her “that was so weird” she kept saying. Then I gave her the present, she looked at me and said “here’s another coincidence, when I finished with my boyfriend I wanted to take a beautiful pyracantha which meant a lot to me, but my boyfriend wouldn’t allow me to take it. The reason it was so special was that Charlie always loved to sit next to it and I’ve got a beautiful photo of him lying by it, which is very precious to me. That’s also spooky you getting that, how did you know?” My reply was “God works in mysterious way”

On Monday 22 November at 8am, 3 weeks after Charlie’s passing he suddenly appeared and jumped on Emily’s bed where he would often lay, waiting to be fed, and purred contentedly but, as soon as she put her hand out to feel him he vanished. She was so pleased that he had come back to tell his “mummy” that he was alright. Even though she was disappointed that the moment was over in a flash it brought immense comfort for Emily to realise that life lives on after physical death for animals too. Isn’t it comforting to know that our loved ones are only ever a thought away!